A victory for Josef Newgarden in the Honda IndyCar Grand Prix of Alabama capped a fantastic weekend for the Team USA scholarship programme, which is supported by the Road Racing Drivers Club and SAFEisFAST.com.

Team USA’s current drivers and alumni won at every level of the Road to Indy series at Barber Motorsports Park. Newgarden, who was a Team USA driver in 2008, took his first ever IndyCar series victory. Having qualified in fifth he got off to a flying start gaining three places on the opening lap and taking the lead after the first set of pit stops. From that point on he controlled the race from the front and drove his way to an impressive maiden win. In doing so, Newgarden became the programme’s sixth alum to win an IndyCar race, emulating Jimmy Vasser, Bryan Herta, Buddy Rice, A.J. Allmendinger and Charlie Kimball.

In Indy Lights, Spencer Pigot won both of the weekend’s races, leading from lights to flag in the first and finishing more than six seconds ahead of the competition in the second. The 21-year-old, who drives with SAFEisFAST decals on his Juncos Racing car, was a Team USA driver in 2010 and 2011 and now leads the Indy Lights championship by seven points.

Neil Alberico, a Team USA driver from 2011-2013 extended his lead at the top of the Pro Mazda Championship with a win in race one and a fourth in race two in Alabama. He will be hoping to emulate Pigot, who won the championship last year before graduating to Indy Lights.

In the USF2000 series, the first open-wheel rung on the Road to Indy ladder, 23-year old Aaron Telitz pulled off two spectacular passes on his way to victory in the first race of the weekend. Telitz won his Team USA scholarship last year and is now competing in his second year in the USF2000 championship, having won rookie of the year honours in his maiden season.

Team USA is an initiative that provides scholarships to aspiring racers, helping to nurture their talent and propel them to the top of the motor sport ladder. Last weekend’s race wins in the USF2000, Pro Mazda Championship, Indy Lights and IndyCar series continues a history of success for the programme that counts multiple CART and IndyCar race winners amongst its alumni.

Watch our video ‘Winning a Racing Scholarship with Team USA’ to find out more about Team USA. 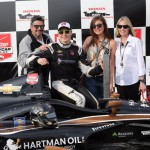