Officially sporting SAFEisFAST livery for the first time, Team SAFEisFAST had a promising and eventful outing at the inaugural iRacing 12 Hours of Sebring.

The team competes in the iRacing Endurance Championship, driving a RUF Porsche in the GT3 class.

For the uninitiated, iRacing is an online motor racing simulator that emphasises realism and competition for it’s 55,000 plus members. Users can compete in a range of different classes and competitions at various different real-world circuits.

In qualifying the team showed that they have raw pace, with driver Mathieu Rioux setting a sub 2:05 lap time that placed them ninth on the grid.

Rioux started the race and set about moving up the pack for the first hour and a half, eventually clawing his way up to second. At the first driver change Dave Beland took over and set about the task of retaking the positions they had lost in the pits again managing to get the #024 car back into second spot.

A series of disasters struck beginning on the last corner of the lap 71. Beland got loose and struck the wall resulting in time lost due to repairs and dropping the team down to 18th. As the repairs were finalised Ed Benson took over for his first stint, only to be felled moments into it by a glitch in the virtual track. Although it appeared that he had not made contact with the wall, the car was bounced across the pit lane resulting in another 47 minutes of repair.

Determined to counteract his misfortune, Benson resumed and managed to log enough laps to meet the mandatory minimum each driver must complete. He then left to go to his day job – something Dario Franchitti has probably never had to do.

Drew Bickel, Steve Coe and Rioux combined for the final stints but two blown engines and a collision resulted in more time in the pits. They eventually crossed the line in a hard-fought 17th place.

Dave Beland, owner, manager and driver of the team, commented: “Our week started off very well, with competitive practice times, testing setups, and working through strategy for qualifying for the best possible position. Our main goal was to keep it safe and finish the race. Mathieu Rioux (Crew Chief, Team SAFEisFAST) was able to get us into a setup that was very stable as well as competitive for all the drivers on our team. The team had a great time competing, cheering one another on, while also providing words of encouragement and support. But the race just didn’t go our way today. We didn’t achieve the results we wanted today, but we’ll regroup and come back again in a few months when the 2015 iRacing Endurance Championship resumes July 11th with the Six Hours at the Glen.” 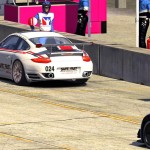