Five drivers have each won a pair of top-level Arrow RG-7 race gloves from leading motorsport apparel manufacturer Sparco, as part of the latest competition from SAFEisFAST.com.

The competition received over 1,000 entries from aspiring drivers across the globe. The five winners, who all correctly answered a set of safety questions, are:

The ultra lightweight Sparco Arrow RG-7 race gloves are approved by both the FIA and SFI Foundation governing bodies. Thanks to a pre-curved design with external seams, they provide a great fit and comfort to the driver.

The Sparco Arrow RG-7 provides high levels of control as the palm is printed with high-grip HTX, an impact absorbing flame resistant, high-grip material, which is exclusive to the Italian manufacturer.

Rachel Saunders races in the SCCA Solo and ProSolo championships in the United States. The 19-year-old competes with a 1997 Mach Legrand “Dragon”.

At 16-years-old, Sam Adams is the youngest winner of the most recent SAFEisFAST competition. In 2015, the US-born driver will take part in the Skip Barber MAZDASPEED Pro Challenge behind the wheel of a Mazda MX-5 Cup Car.

Rodrigo Gini is a 41-year-old rally driver and journalist, who drives in national and regional championships in his native South America.

Sean Doyle is a 21-year-old driver. While competing in the 2014 Formula Ford 1600 championship, the Irish-born racer was awarded with the ‘Young Driver of The Month’ accolade in June and was a Dunlop Sexton young driver finalist.

All five winners have selected their Sparco Arrow RG-7 race gloves, which are available in five colours and seven sizes. 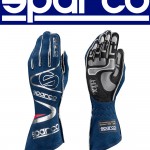