A new edition of Dr Stephen Olvey’s memoir “RAPID RESPONSE: My inside story as a motor racing life-saver” will be available in April, as part of promoting the upcoming feature film based on the best-seller.

Originally published in 2006, the book is a compelling look at Dr Olvey’s time working in IndyCar as a doctor and the frustrations he had to overcome while trying to make motorsport safer.

The film is from the producers of the TV documentary ‘Yellow, Yellow, Yellow: The IndyCar Safety Team,’ and will release this summer with interviews from Olvey and various drivers as it delves into the journey of safety development in motorsport.

To commemorate the reissue of the bestseller and release of the film, we’re going to throwback to when Dr Olvey has featured in SAFEisFAST films in previous years to discuss a range of topics, including concussion in motorsport, how to avoid injuries in a crash, and how crucial a top quality helmet and frontal head restraint can be to driver safety.

How to Crash – Safely

You can purchase the book here. 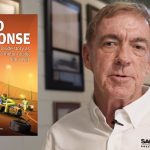